DMOZ Web Directory – About Us

What Powers Our Directory?

As former directory editors, we were sad to see DMOZ announce their closure on short notice, so we decided to use their RDF file to preserve the work & create a static snapshot of their web directory.

Our site does not carry advertisements, but aims to reflect the historical snapshot of the DMOZ database which was located at DMOZ.org.

In addition to offering an easy-to-use drill down feature which allows users to navigate through categories, we also offer a search function to search across listings within the directory. As the site is currently configured any search can show a maximum of 100 related categories & 100 results. Where individual listings appear in search results the category associated with the listing appears under it, so users can look within the associated category for related sites.

Yes, we accept adding more from the site, but under conditions that they are of high quality.

How Expensive is this Site to Run?

It cost a few thousand dollars to build this site, but the running cost is quite low as long as we maintain a static version of the database.

If we ever allowed editorial submissions it would require shifting to a far more expensive hosting account which could cost $500 a month or more to run as the current MySQL database is over 3 gigs.

If the only review option was free then we would absorb the editorial review cost structure AOL no longer wanted, so we prefer to offer a static snapshot rather than add new listings.

We are also not convinced that a paid editorial review service would work. The Yahoo! Directory shut down in 2014 in spite of charging a recurring annual fee of $299 and being one of the earliest web directories. Further, running the site with paying customers would require spending more not only on marketing but also on a more powerful web server and a redundant hosting backup. Those costs would be in addition to hiring editors or an editorial staff to oversee volunteers.

In short, one would need to make somewhere over $5,000 per month in revenues to break even with the costs of

If one wanted to hire a programmer to help automate managing spam submissions, dealing with link rot, etc. … that recurring upkeep of the directory would at least double the required revenues to break even.

Do You Track Users?

We do not track user search queries & if you test submitting a query to the search page we do not append the search query to the URL, so neither we nor our web analytics provider track search queries. Further, many leading search engines like Google, Bing & Yahoo! do not pass keyword referrers for most searches on their sites.

Is This Site for Sale?

No. We built this site so we could ensure the DMOZ database was preserved for many years to come.

While this site uses the DMOZ RDF database, we are not affiliated with DMOZ.org or AOL.

It was a volunteer ran open directory of websites owned by AOL but maintained by volunteer editors who were topical experts who had a personal interest in the categories they edited.

When Was DMOZ Founded?

The service was coded & initially seeded from April to June of 1998, leveraging flat files & simple HTML forms to build the directory tree & make editing easy. It officially launched to the public on June 5, 1998.

Why Was DMOZ Created?

Listing problems were confirmed in a Chris Oakes article which Wired published on Feburary 11, 1998.

Rich Skrenta decided to create a more scalable competitor to the Yahoo! Directory based on volunteer editors.

DMOZ was acquired by Netscape in October of 1998 for $1 million.

In November of 1998 AOL acquired Netscape for $4.2 billion in stock.

Verizon also announced they would acquire the Yahoo! operating business on July 25, 2016 for $4.83 billion. They later reduced the acquisition price by up to $350 million based on Yahoo! account credential leaks due to multiple hacks.

After the Yahoo! acquisition went through Verizon created a B2B parent brand named Oath encompassing AOL, Yahoo! and 18 other online publishing brands like TechCrunch and The Huffington Post.

After Tim Armstrong left Verizon, Verizon dumped the Oath brand name & put all these properties under the name Verizon Media Group. In December of 2018 Verizon took a $4.6 billion write down charge for goodwill on the Oath properties.

Verizon still owns the DMOZ.org domain name, but they shut down the associated web directory.

When Did DMOZ Shut Down? 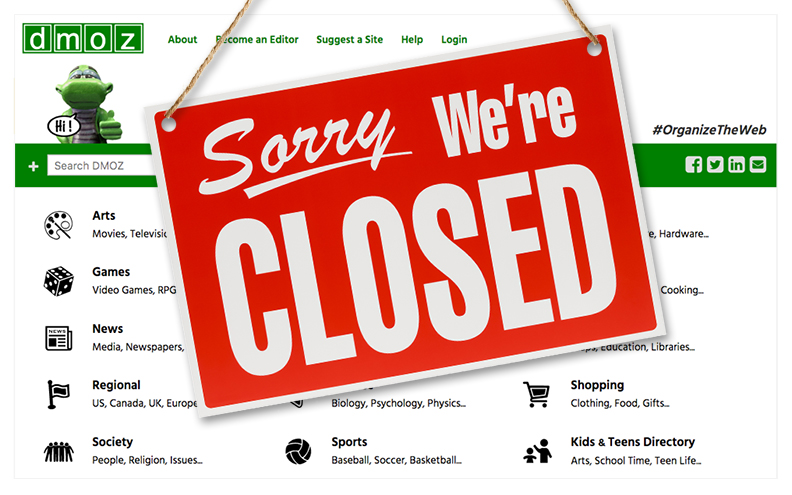 Why Was DMOZ Shut Down?

AOL did not state a reason for closing the directory. However the directory (like other general purpose web directories) saw declining influence and usage as user search behavior shifted away from web directories to search engines. This shift was accelerated by the shift to mobile devices, as searching on mobile devices made instant answers a far better user experience than a list of websites. Many major search services like Google & Bing offer instant answers & knowledge panels in their search results which aim to answer frequently asked questions.

The web directory model of listing websites struggled to compete on relevancy with search engines that quickly surfaced the most relevant pages (or even the most relevant answers) from widely trusted websites.

Larry Sanger claimed DMOZ was an inspiration driving the launch of Nupedia, which led to the founding of Wikipedia. Content from Wikipedia is used widely by search engines in instant answers and knowledge graph results.

Online advertising has become highly consolidated with Google & Facebook taking most incremental ad revenue growth in recent years. Display ad prices have been falling for years on most sites outside of Facebook. Facebook & Google have better user tracking & ad targeting data than most competing ad networks, in part because ISPs were prohibited from selling user data, until that regulation was overturned in the US Congress in early 2017.

AOL’s profitability has largely been driven by a couple million dial up subscribers rather than their online publishing operations. With the US Congress now allowing ISPs to use subscriber data for ad targeting some Verizon insiders believed they have a strong chance of battling the Google / Facebook duopoly in online advertising by distributing content from AOL, Yahoo! & their other online properties to their subscribers & offering more precise user ad targeting. Part of the reason Tim Armstrong left Verizon is they were more cautious with user data than he hoped & it was hard to play catch up with Google & Facebook given the ongoing declining relevance of AOL & Yahoo!.

Where Did The Name DMOZ Come From?

It is an acronym for Directory Mozilla. The web directory was published at directory.mozilla.com before moving to DMOZ.org.

What Made DMOZ Better Than Competing Web Directories?

Most web directories were far smaller in scope & depth. Other large directories had paid editorial staff, which made building & maintenance of the directory more expensive.

DMOZ also licensed their directory to other sites freely in exchange for a link pointing back to dmoz.org. For many years large web portals & search companies like Lycos, AltaVista & Google also ran customized versions of the DMOZ directory.

Are There Any Other Major General Web Directories?

In the early days of search DMOZ had 3 major competitors in the Yahoo! Directory, Go.com’s directory & the Looksmart directory. Looksmart incorporated a volunteer directory for non-commercial results names Zeal, which they acquired in October of 2000 for $20 million.

All three leading competitors shut down prior to DMOZ’s closure.

The WWW Virtual Library was created by Sir Tim Berners-Lee in 1991 & is the oldest catalogue of the web, but it is a collection of directories across academic areas rather than a single unified directory.

Best of the Web began as an award site in 1994, but later shifted to a general web directory service. It is still running, but was not as widely known & influential as the Yahoo! Directory and DMOZ once were.

Vertical directories like Business.com have been sold multiple times as they have struggled to maintain relevance. Online directories associated with print yellow page books have suffered a similar fate of declining relevance. The only large directory services which still appear to be strong economically are sites which have become consumer destinations like Yelp, TripAdvisor & Zillow. These sorts of sites tend to rely heavily on user reviews, gamification, publishing custom metrics and/or freely exposing information which was previously available exclusively via paid access.